For someone beginning research into French helpers of Allied airmen during WWII, the following link might be a good place to start: https://wwiinetherlandsescapelines.files.wordpress.com/2012/11/narafrenchhelpersocr-1.pdf.  It will provide access to an 852 page listing of French helpers.  Note that a page number of the above pdf file will not be precisely the same as the corresponding typed page number because some of the typed pages are blank.  Also watch out for errors.  For example, typed page 533 contains names beginning with “Lu” and is followed by typed pages 437, 431, and 424 containing names beginning with “La” and an unnumbered page with names beginning with “Le”.  Be sure to check the last page of each letter section for any listings of names that are out of order.

This part of the website has some new features, including a list of files on French helpers (see bottom of this page) and a database of French helper names.  To view the latter, click here.

The following sub-pages will reproduce the list of members of the French Resistance who helped Allied airmen as compiled after the Liberation by Allied Military Intelligence and photographed by John Howes at The National Archives, Kew, London in 2012.  The official title is Register of Helpers, I.S.9 (Awards Bureau) Paris.  For a source that will explain the meaning of IS9, click here and scroll down to the heading, “Reference Work on British Escape and Evasion.”

The list consists of approximately 1,484 images.  With most pages containing some 13 to 14 listings, there are some 20,000 listings.  But many listings include the names of other members of the family, so the actual number of names may be significantly more.

For a discussion in English of the meaning of the Award Grade assigned to a helper, see http://www.evasioncomete.org/TxtAwards2.html.  For a French language explanation, see http://www.evasioncomete.org/TxtAwards.html.  An explanation of the award grades also appears on this website in the report on the History of the Holland Office, 6801 MIS-X Detachment, the second memo (dated 28 June 1946), pp. 7-11.

Some names are out of order.  Usually that won’t present a problem as long as you check the page where it should be and the pages immediately before and after.  Occasionally there are out-of-order names that are to be found at the end of the entire list of names for a particular letter of the alphabet.  I have attempted to alert the user of the list by providing notations to that effect on the heading of the page where a name should have been as well as on the heading of the page at the end of the list for that letter of the alphabet where it actually is.  For example, the name “Fourchaigu” should have appeared on page 993 which contains the names “Fouquet” to “Fourmaux” but instead is at the end of the last F-page, page 30011, “Fulbert” to “Fynnaert.”

The list of French helpers has more information than the lists of Dutch and Belgian helpers, often including the person’s occupation and the names of other members of the family, in addition to notations about whether the person was deported, on a black list, the award grade, monetary aid, etc.  I have even noticed the notation “not evasion,” the list apparently including some people who did not help airmen but did something else.

Keep in mind that an address given for someone on the list may be a postwar address and not necessarily the one from which the person was active during the war.

To correctly cite the sources for these names at The National Archives of the UK, the following designations should be used:

Note that when I refer to a  “page,” I am actually referring to an image number generated by the system used to photograph the actual pages of the original list.  In the first images that I posted on this website I shortened the number of the page, trimming off the first few digits.   Later, farther into the alphabet, I changed my practice and posted the full number.  The actual page numbers of the index itself can be read from the images.   I  began loading the images in October 2013 and and finished on November 20, 2013.

An image can be enlarged by clicking on the image and enlarged even further by clicking a second time.  Use the back arrow to go back to the original image.  To go directly to the sub-page for a particular part of the alphabet, click on the appropriate letter below: 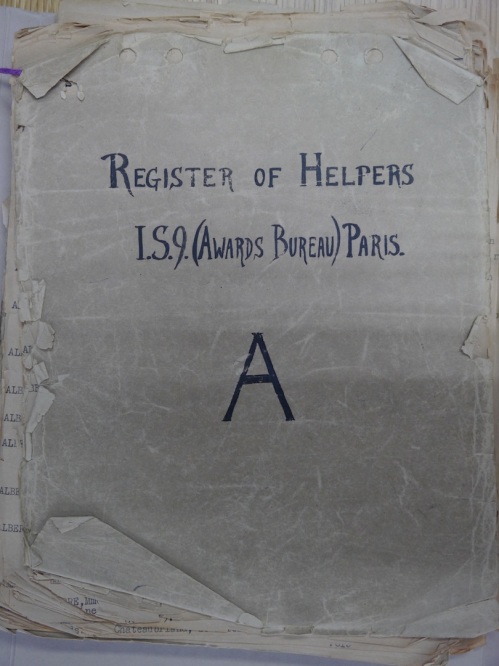 Compare this index with the index to French helpers scanned by the National Archives and Records Administration.  Click here to view it.  Then scroll down to “Search within this series” and click on it to access the pages of the index.

The National Archives and Records Administration (U.S.) has begun scanning their records relating to helpers of Allied airmen.  The following link will provide access to a catalog of names of French helpers.  Researchers would be advised to compare the list of names in the catalog against the British National Archives list of helpers (see above).  The link is as follows: https://catalog.archives.gov/search?q=*:*&f.ancestorNaIds=5682720&sort=naIdSort%20asc.  As an alternative to using the link just mentioned, click on the following pdf file of the same index: NARAFrenchHelpersOCR (1).  It is easier to use.  The U.S. index of French helpers contains only some 12,000 persons, much less than the British list.  Nevertheless, it might be useful for researchers to compare the two when searching for the name of a helper.

The SHD (http://www.servicehistorique.sga.defense.gouv.fr/) has published a list of over 1700 members of escape lines operating in France.  The list is 38 pages long and organized by escape line.  Within each escape line, the names are by file number, not alphabetical.  Click on the following pdf file to open the list.  To search for a particular name of a helper, use Control+F.

The escape lines are listed in the order in which they appear in the list:

Also at SHD are 600,000 files on members of the Resistance.  They are to be found at http://www.servicehistorique.sga.defense.gouv.fr/?q=content/dossiers-administratifs-de-r%C3%A9sistants . When you click on that link you will get the following:

Then scroll down to Répertoires alphabétiques and click on the part of the alphabet that you want to view.

To order files, you will first need to create an ID.  Go to Réserver des Documents  at http://www.servicehistorique.sga.defense.gouv.fr/?q=content/r%C3%A9server-des-documents-0.  Ordering files has to be done five to seven days prior to pickup in person.  Copies of files cannot be obtained by mail nor are they available online.  When you place a request for copies, you will want to refer to  SHD GR 16 P.  Go to the page entitled “Demander une reproduction” at http://www.servicehistorique.sga.defense.gouv.fr/?q=content/demander-une-reproduction for further details.