T/Sgt. Chet Hincewicz, USAAF, (above)  was passed off as a Polish day laborer from Lwow, Poland by the name of Pawel Hinewie.  Actually he was from a Polish-American family in Scranton, PA and, fortunately, spoke Polish.  For more information on Hincewicz, click here.

P/Off. William “Bill” Robertson, RCAF, of Toronto, Canada, (above) masqueraded as Georges Vanstraeten, an electrician from Hasselt, Belgium.  For more information on him, click here.

Our thanks to Ed Renière of Brussels for the two above examples of false ID.

False ID Used by in France by 1st Lt Charles V. Carlson, Bombardier on the “Shack Rabbit 3”, Shot Down Near Beloeil, France, October 20, 1943

Interior of false ID of “Charles Leblanc” showing it as supposedly having been issued by the Prefecture of Pas-de-Calais.

Identité du Titulaire (Identity of the Holder) of “Charles Leblanc”

For further information on Carlson, click here.  Our thanks to Margaret Fricke for sharing with us her father’s false ID.

Karst Smit, a Sgt. in the Marechaussees and leader of the Smit-van der Heijden Line, went into hiding in November 1943 when his line was penetrated by the Germans.  The above false ID was created for him using the name Gerardus Antonius Gevers.  Dutch IDs, imposed on the Dutch population by the Germans, were much more difficult to forge than even German IDs.  Armed robberies by Dutch Resistance members of government offices was one way to obtain the ID forms. 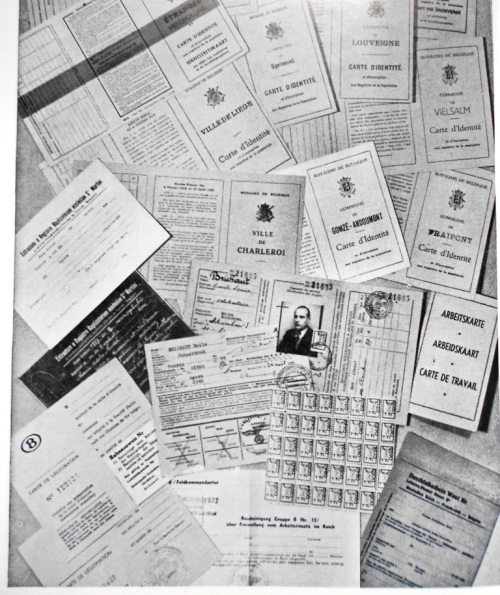 For links to some other sources of information on false ID, click on the following page of this website, World War II False ID.