The following are excerpts from a document dated 13 May 1946 headed:

3. HISTORY.  Karst Smit, subject of the Netherlands and a sergeant in the Netherlands Royal Mounted Police, served the Allied cause from May 1942 until his arrest by the enemy in March 1944 by saving Allied personnel from falling into the hands of the Germans.  While working in a clandestine organization which he established with the help of other members of the Royal Mounted Police and former officers and non-commissioned officers of the Dutch Army, he was responsible for the successful evasion of at least twenty-nine American and Allied aviators who had been shot down in combat over enemy-occupied territory.

At the start of his underground activities, he devoted his time to evacuating numbers of French prisoners of war.  When he began working with Allied air force personnel, the bulk of his job was transporting men from Tilburg to Brussels across the Dutch-Belgian border.  He frequently operated alone on these convoy trips, though on occasions when the enemy’s police surveillance was exceptionally severe he employed assistants.  For these trips Sergeant Smit provided his charges with Dutch and Belgian identity papers as well as money in the currencies of both countries.

His widespread acquaintances permitted him to establish an evasion network extending over the whole of Holland and part of Belgium.  In the latter country he worked closely with members of the gendarmerie to whom he passed on evaders he had recuperated in Holland and transported across the frontier.  Originally he maintained his headquarters in Enschede in the province of Overijsel, traveling through the southern provinces of Holland to Brussels; later his terminal point was a Weeldestraat in Belgium.  Constantly on the move, crossing and recrossing the border, he exposed himself continually to the suspicions of the German police.

On 13 November 1943, following the arrest of one of his close associates, Sergeant Smit’s evasion chain was smashed.  He took great risks to warn as many members of the group as possible, then went into hiding himself.

After a careful analysis of future possibilities, he decided that in spite of the precariousness of his situation, he would resume his work.  He placed his services at the disposal of another evasion chain whose leaders sent him to France to organize an escape line through the Pyrenees Mountains into Spain.  He was unable to operate very long in this new assignment, however, since while in Paris he was betrayed to enemy counter-intelligence.  From 18 March 1944 until 28 April 1945 he was confined in a concentration camp.  In the last days of the war he escaped from the camp and joined the advancing American forces.  He was hospitalized by them and later returned to Holland.

PROPOSED CITATION: SERGEANT KARST SMIT, subject of the Netherlands, for heroic and unstinting service in support of the Allied cause from May 1942 until March 1944.  Disdainful of the constant danger to himself and exhibiting a high degree of intelligent planning, he repeatedly performed hazardous operations to protect a total of twenty-nine Allied air force personnel from the enemy.  Even after the Gestapo had destroyed his organization, he resolutely continued his evasion activities in complete disregard of his own safety, until finally he was betrayed, arrested and deported.  His courage, loyalty and devotion enabled him to make an exceptional contribution to the success of Allied military operations, a contribution meriting the highest recognition of the United Nations. 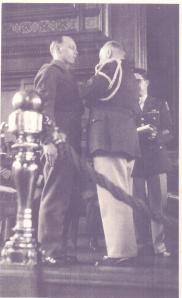 Karst Smit being decorated with the Medal of Freedom with Silver Palm, 18 November 1946