This page of my website has to do with the Phantom Train (Le Train Fantôme), also known as the Nazi Ghost Train.  If you scroll down you will find my brief description of what happened, originally written in 2003 and appearing elsewhere in this website.   For a short bibliography on the subject, click here.

Following this page of the website are seven sub-pages:

First: A list of Allied airmen who were imprisoned in one of the boxcars.

Second: A minute-by-minute account of the Phantom Train written by Walter Vertstraeten of what happened.

Third:  An account of what happened written by Jean-Marie Moortgat, alias “Brochet,” a Belgian policeman who was a member of the Resistance group MNB.  Moortgat had been the cell mate of Robert Sauveur, a member of the Luc-Marc intelligence line who, before his arrest, was hidden by Arthur Schrynemakers.

Sixth: A list of prisoners.  It consists of  approximately 977 names compiled from two separate lists provided by two different archives.

Eighth: Photos of the antogonists–the engineer and fireman who foiled the plans of the SS general.

At the end of this page, see also the LINKS TO OTHER SOURCES, which include several books and a link to a YouTube site for the History Channel Documentary, “Nazi Ghost Train”.

On August 25, 1944, Gen. von Choltitz, the German commander in Paris, signed the act of surrender.  Paris was liberated.  The British Army now turned north—Brussels and Antwerp were next.  St. Gilles, the main prison in Brussels, held 1500 political prisoners, including many members of Service EVA, such as Blanche Page, and some 50 Allied fliers.  By September 1 the prisoners in their cells were already celebrating their imminent release.  Family and friends packed the balconies and roofs of the buildings surrounding the prison, waiting to see their loved ones.  But shortly before midnight, the German commander of Belgium, SS Gen. Richard Jungclaus, ordered the 1500 prisoners to be shipped to Germany.  When the prisoners were ordered out of their cells to be loaded onto trucks, they fought back but fists were no match for rifle butts and bayonets.  As the convoy of trucks made its way to the Gare du Midi railway station, the desperate prisoners wrote messages on scraps of paper and torn remnants of clothing pleading for help, which they threw from the trucks to the onlookers on the streets. 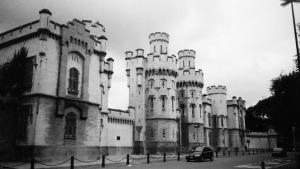 Another chaotic scene ensued at the Gare du Midi where the SS men had to force the prisoners into the cattle cars while holding back the hundreds of relatives who were trying to prevent the prisoners from being deported.  When the assistant stationmaster arrived for work early that morning he realized what was happening and ordered that the train’s departure must be delayed by every possible means.  The engine’s oil pump was torn out and two successive engineers were made unavailable to take out the train, one having deliberately injured himself.  While the packed train sat in the station, a railway worker, out of sight of the SS guards, tapped on the sides of the cattle cars, and whispered to the prisoners, “Don’t worry, you won’t cross the frontier.”

When the train finally did get underway, in the middle of the afternoon on Sep. 2, it was only because SS guards had guns at the head of the third engineer.  But railway workers ensured that signals were always red; another train blocked its way; railway signalmen forced it onto a siding; the fireman blew the whistle so much that steam power was lost; and so on.  It took eight hours to go to Malines, a town only twelve miles north of Brussels, where the German plans called for picking up a load of Jews.  But the engineer devised another delay.  Pretending that the engine needed more water, and knowing that the water tower at Malines was destroyed, he convinced the guards into letting him divert the train to another town, Muizen, where the train spent the night of Sep. 2-3.  By now the Nazi officials had no idea where the train was.

Meanwhile, diplomats from neutral nations had been pleading with Gen. Jungclaus to allow the return of the train.  He refused until the Resistance relayed a warning to him that unless it was returned, they would attack German hospital trains carrying wounded German soldiers.  He finally relented.

On Sep. 3 the “Phantom Train” returned to Brussels where International Red Cross workers freed the prisoners. Fifteen hundred people had been saved.  The British Army liberated Brussels on Sep. 4.

LINKS TO OTHER SOURCES

There are three sources on the Internet that I know of relating to the Phantom Train incident:

2. The PBS documentary, “Last Best Hope, A True Story of Escape, Evasion, and Remembrance,” at http://www.pbs.org/lastbesthope/.

5. A five-minute excerpt of The History Channel’s documentary on the Phantom Train (referred to as the Nazi Ghost Train) appears at http://vimeo.com/7698202.