The following are excerpts from a document dated 10 May 1946 headed:

3.  HISTORY:  EUGENE VAN DER HEYDEN, subject of The Netherlands, was extremely active in the work of recuperation and repatriation of Allied airmen from March 1943 to January 1944.  Working with the organization of Karst Smit, van der Heyden was of direct assistance to twenty-two Allied aviators, twelve of whom were Americans, who had been shot down over enemy-occupied territory and were seeking to escape from the Gestapo which was constantly hunting them.

When he began the work of evacuation and escape, he had already been active in the Dutch resistance movement, and thus had many valuable contacts among Dutch patriots.  He soon became supervisor of a collecting point for evaders, near Esbeek, Holland.  Allied evaders gathered from the northern provinces of Holland were fed, clothed and sheltered here while false identity cards were prepared and all other necessary arrangements made for their evacuation from Holland.

On a number of occasions van der Heyden escorted Allied fliers from Esbeek to the Belgian border from where they were taken to Brussels by Belgian patriots.  In several instances he personally convoyed fliers all the way to Brussels, and in most cases these men successfully regained their home bases.

In January 1944 the organization to which van der Heyden belonged was broken up by the Germans.  Eugene van der Heyden escaped, but his father and two brothers were arrested and deported to concentration camps from which they never returned.

EUGENE VAN DER HEYDEN, subject of the Netherlands, for service in the cause of freedom from March 1943 to January 1944, while aiding Allied airmen shot down over enemy-occupied territory.  EUGENE VAN DER HEYDEN, in his self-chosen mission, inspired his compatriots by his fearless leadership and devotion of purpose while assuring the successful escape of twenty-two Allied airmen from the enemy.  His heroism and his determination were of inestimable aid in the prosecution of the war and his magnificent contribution to the cause of Freedom merits the esteem and gratitude of the United Nations. 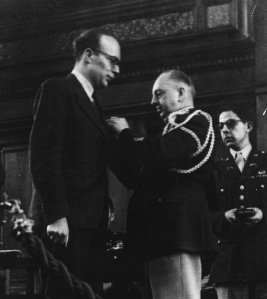