Below are three photographs and one sketch relating to the Smit-van der Heijden Line.  I am requesting help in identifying the people in the photos.

The first photo, taken during the Dutch mobilization of 1939, shows Karst Smit, the third man to the right of the “Mobilisatie 1939” sign, wearing a white shirt and with his hands on his knees.  Can anyone identify any of the other men?  They probably were all members of the Jagers Regiment.  You can click on the photo to enlarge it.  Click a second time to enlarge it even further.

The  next photo, taken at a jovial moment, shows a group of marechaussees who have all piled on their  single motorcycle, a BMW.  The photo most likely was taken in either Baarle-Nassau or Hilvarenbeek.  Karst Smit, wearing an overcoat, is shown in the driver’s seat.  I would like to be certain of the identity of the other men and would welcome assistance in identifying them.   The person labeled as #2 was identified as Albert Wisman by his nephew, Henk van den Elst, in September 2017.  (In a different photo of Wisman and Karst Smit, Wisman does appear to be the same person as #2 below.)  Tentative identifications of #’s 1, 4, and 6 were made by former marechaussee Oscar Lippens in an interview by Jos van Roozendaal.  Marechaussee #5 was confirmed by Lippens as Karst Smit.  Marechaussee #4 was identified as Albert Wisman by his son, Richard Wisman, on Jan. 17, 2021.  But Marechaussee #4 was tentatively identified as David Jonkers by his son.  They are as follows:

The third photo, shown below, is reproduced from the book Een vlechtwerk van lijnen, p. 57, by Janine Marseille-Smit, sister of Karst Smit.  You can click on the photo to enlarge it.  Click a second time to enlarge it even further. 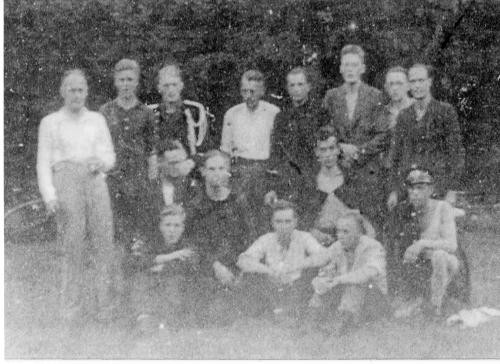 The following sketch labels the people in the photo to the extent that I have been able to determine their identity as of August 2013.  A further discussion appears below the sketch.

Janine Marseille-Smit, in her book, identifies #15, as Karst Smit’s brother, Rommy (Romke), who spent some time in the forest hideout at the Landgoed de Utrecht with the Dutch students.  I first thought that #3 might be Albert Wisman because of the marechaussee uniform and the fact that Wisman was assigned to the nearby village of Esbeek.  However the man shown does not look like the photo of Wisman that I have from the Dutch Ministry of Defense or a photo that I have of Wisman and Karst Smit.  Three other marechaussees also were assigned to Esbeek, Theo Backx, Gijsbertus Aarts, and Verbrugge (first name not known).  I now think #3 probably is Theo Backx or Verbrugge because the family of Gijs Aarts has identified #12 as Aarts and provided photos of him in the type of uniform he was wearing in the above photo. The identification of #6, Jan Wolterson; #7, Jan Kuitenbrouwer; #8, Jan van Dongen; #10, Dick Los; #13, Jan de Koning; and #14, Jan Oudemans, was provided by Jan Wolterson.  Note that Kuitenbrouwer was an assistant bookkeeper working at the office of the Landgoed de Utrecht and got to know the students. It seems likely that one or more of the other people in the photo are members of the family of Adrianus de Bruijn near whose farm the students were hiding in the summer of 1943.  Can anyone help me with further identification of the remaining people and confirmation of the ones identified so far?

One response to “Photograph Identification”