“Cloth maps were first introduced by the British during World War II.  Christopher Clayton Hutton, who worked for MI9, a subsection of British Military Intelligence, is credited with cloth map invention.  Hutton was not a geographer but, in 1940, he secretly met with John Bartholomew, one of England’s most prominent map-makers.  Bartholomew supplied maps to Hutton over Germany, France, Poland, Italy, Austria, Switzerland, Belgium, Holland and the Balkans, waiving all copyright to the map data in support of the war effort.  After Hutton received the cartographic source,  he needed a medium on which to print the maps such that they were quiet to unfold, would not disintegrate when wet, and would maintain their integrity when folded at the crease line.  In addition, they had to be concealed in very small spaces.

After many attempts to print on silk squares, Hutton almost gave up.  Then he tried adding Pectin, a form of wax, to the ink such that it did not run or wash out when put in water, even sea water.  Hutton printed escape maps on silk, manmade fiber and tissue paper.   The tissue paper was made from mulberry leaves, not the traditional wood pulp, and had the texture of onion skin and was extremely durable.  One could ball up this tissue page, soak it, and then flatten it without creases.

In November of 1942, a small contingent of American Intelligence officers went to England to learn of British efforts in the Escape and Evasion arena.  Each officer received a leather bound copy of a book called Per Ardua Libertas.  In this book were examples of each cloth and tissue escape and evasion map produced to date.  After this meeting with the British, the United States began to produce its own escape maps.

The Army Air Force (AAF) through the efforts of its Aeronautical Chart Service produced a series of the cloth maps printed on rayon.  From this came the term ‘silk maps.’  One of the military uses of the silk (cloth) maps was to include them in the survival kits of allied pilots.  Their durability and foldability were ideal for downed pilots in enemy territory.  Soon after WWII ended the U.S. Air Force was formed and the cloth maps continued until the early 1950s as part of the Cold War effort.  The story of the WWII cloth (silk) maps has been difficult to piece together because of the manner in which they were developed and because their production was shrouded in secrecy during and after the war.

The first U.S. cloth map made during WWII displayed a ‘Road Map of West Africa’ and was printed in 1942 on balloon cloth.”

Another interesting article on escape maps is to be found at the following: Hall, Debbie, British Library Map Library, “Wall Tiles and Free Parking: Escape and Evasion Maps of World War II,”: http://www.mapforum.com/04/escape.htm.  Its emphasis is on escape maps smuggled in to POW camps or made in the camps themselves.

See also what snopes.com has to say on the subject at http://www.snopes.com/military/monopoly.asp.

I am grateful to Odile de Vasselot in 2004  for allowing me to photograph the following “silk map” that she had in her possession.  She served in the Comet Line, the largest and most long-lasting WWII Escape Line. 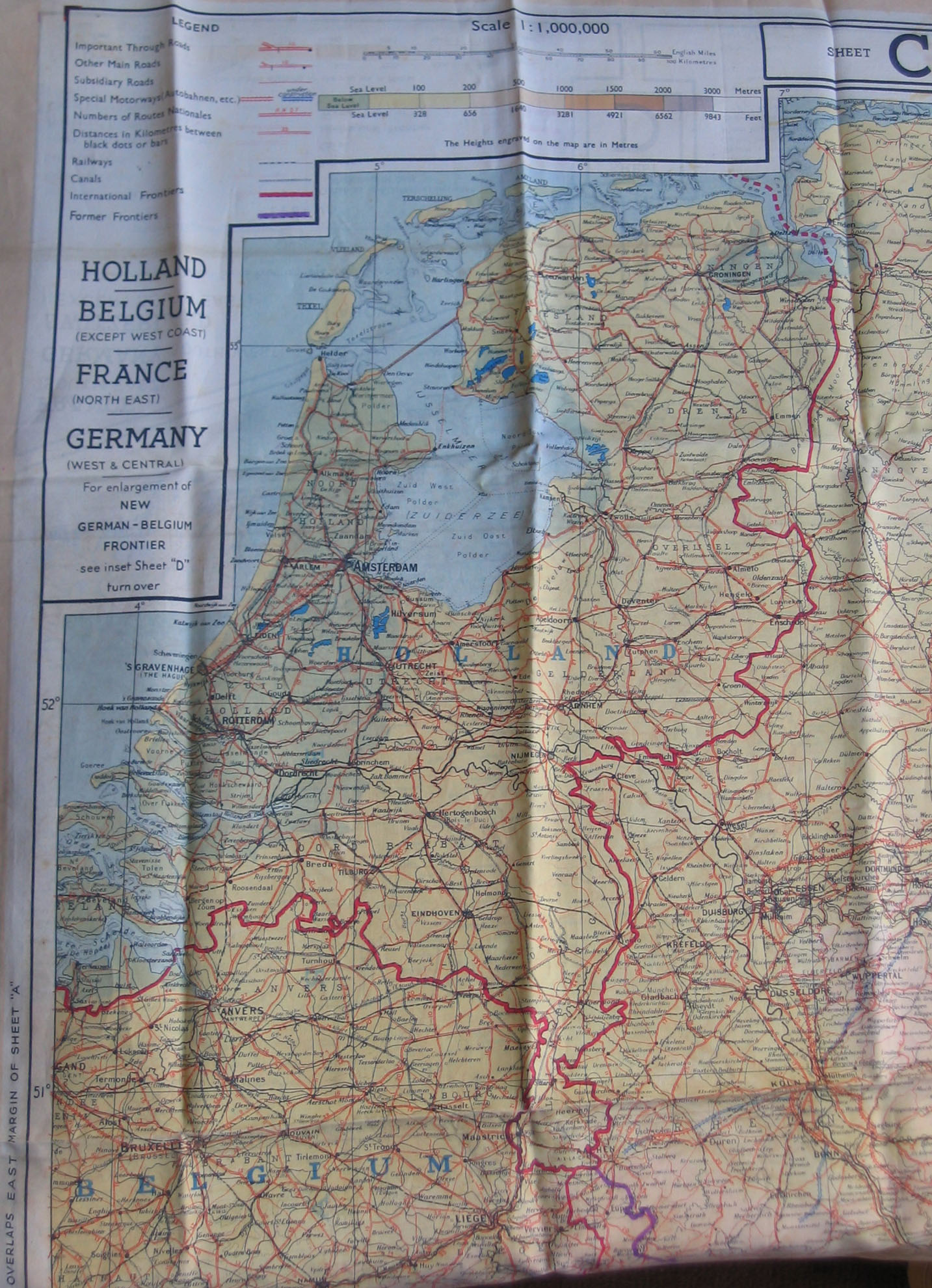 For more on the subject, see “U.S. Cloth Maps of World War II,” in the Air Forces Escape and Evasion Society website on pg. 22 of the June 2008 issue of their newsletter, Communications.

Barbara Bond, The Great Escapes — The Story of MI9’s WW2 Escape and Evasion Maps, Times Books, 2015.  It is available from Amazon.